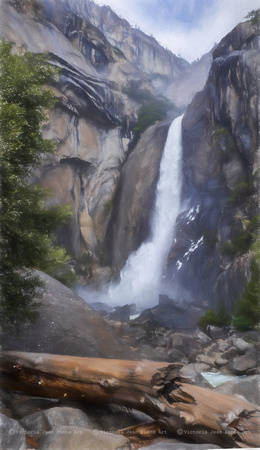 After leaving Springville, we headed to Yosemite. Justin found an RV park just outside in the town of Oakhurst that participated in the wonderful Tents For Troops program, giving us a complimentary night for the RV. While driving in, we saw a few signs luring tourists to panning for gold in their area. I guess this part of California was a good spot for finding some. We read the largest “nugget” found in these parts weighed around 75 pounds!  I don’t think I’d call it a nugget at that weight. I won’t lie, part of me wanted to try panning, but we had other things to do.

We arrived at the RV park, which had recently been flooded from heavy rains. They were still cleaning up the Fresno River overflow sediment with small excavators. We were lucky and got a spot right on the river in a section they just reopened. You could see how far the river had overflowed, there was sand swirled in a churned pattern everywhere outside our RV. I also found fresh prints from a curious raccoon exploring what the river may have left behind for him. By the size of his fatty paddies, he had to be a big fella. Then I noticed it, shimmering golden flecks intermingled with the upheaved sand… could it be? Were we camping on a bed of gold dust? Of course, I let my imagination run with it even though I knew it was only flakes from the granite this area is also known for producing. No matter, I’ll be the fool and collect some of the shiny stuff just to keep as a memory.

We did a short walk with Lil to see how far back the river went, and saw where it rolled over a tiny falls at the edge of the campground. It really was quite lovely. After the stroll, Justin consulted the maps to learn which roads in Yosemite were still closed due to snow, and see where we could go in the park the next day. Another couple of campers pulled in to a spot nearby and wandered over to chat. We talked about how far we’ve traveled so far, about traveling with our pets, and so on. One thing I’ve enjoyed on this trip have been the brief encounters with other campers and hearing their stories. Then on occasion, bumping into some of those same ramblers at other stops along the journey. It really feels like a kinship of sorts to be able to share our experiences.  After dinner in the RV, we turned in, ready for a chilly night.

Chilly, but not freezing. The crisp morning air felt good with the wash of sun breaking through. We pulled the RV out and stopped by the visitor center in town for a little more park information. It was a good thing too, the sweet ole gal we spoke with informed us of a storm coming in this day, a winter storm… snow! She asked if we had chains for our vehicle if we were driving up into higher elevation, which we were to get into the park. Knowing we were not prepared for winter driving, she advised us of the best places to hit up first in the park before the snow started to fall at noon. With her advice, we quickly went on our way. The sky was a beautiful blue, no sign of the impending bad weather, it was easy to get wrapped up in walking the trails and such.

The first sight we stopped to take in was Bridalveil Falls, though there were a few other falls waaay off in the distance we could see on the drive in. Bridalveil had a nicely paved walking trail to it. We walked along the path, making our way to the overlook, getting noticeably wetter as we walked. The falls overspray hung heavy in the air and turned into outright rain at the end of the trail. The temperature up there was so cold, the falls rain froze on the trees and plants around it. What a sight, everything from the sturdy branches to delicate leaves encased in an icy jacket, twinkling in the morning sun. I tried to walk up to the overlook to get a better photo of the frozen branches, but simply slid back in my tracks on the sheet of ice coating the path, so I dropped to my hands and knees and crawled up the path, of course. With as much precipitation that was falling, it was a quick stop. My coat clung to me under the weight of being soaked, and I quickly retreated, sliding back down the path.

Once back at the RV, I glanced across the meadow where a healthy sized bobcat caught my eye as he sauntered along the edge of the forest. I kicked myself for not having my zoom lens ready, but shot a quick photo anyhow.

We drove on, stopping at a point where we could take Lil out on a path in the valley. I walked with her and met back up with Justin in the parking area of our next spot. Along the path, we saw more wildlife, a pair of coyotes snooping around in the meadow. They didn’t mind the tourists at all, and it made me a little uneasy knowing Lily was with, but thankfully she didn’t see them. After our walk, we left her in the RV while we went up the path to the Yosemite Falls. These double falls were stunning, strong and fast, swollen from all the recent rains. Along this path, the wildlife display consisted of a bluebird and a fat squirrel, both of which I had my zoom lens ready for. We walked along, with a small snow covered ice river to our side to remind us of the incoming storm.

By this point, it was after noon and the snow started falling in tiny ice beads that bounced off our cheeks. We decided not to push our luck and drive the 1.5 hour trip back out of the park before it got too heavy. A few times along the way, it was falling heavily enough to block out any distant objects, and as always, I was anxious rolling the RV through freezing rain, down the twisty turns on the road out.

Once out of Yosemite, we stopped at another RV park in Groveland on the other side of the park where we stayed the night. When we checked in, the gal told us several of the area roads had washed out from all the heavy rains. I hadn’t realized it was such an inundation, but sure enough, one of their main roads lay in ruins with large chunks of blacktop heaved over for the new little valley of water to run through. The sky over the park was dark and ominous, I was thankful we made it out before conditions deteriorated too badly. The freezing rain moved into our area soon after, dropping tiny pellets of ice everywhere. It was going to be a night hunkered in the RV, warm and dry. I took the opportunity of extra time to work on photos.

It was just at freezing when we woke today, and the grounds around us were coated in thin crunchy ice, the kind that would melt away with just a warm breath, but no evidence of the freezing rain from the night before. We let the sun rise high enough to melt most of it away before we ventured on. Our goal this day was to reach Redding to visit Justin's grandpa. It was a long drive on fairly scenic highways that we broke up with a Walmart stop for groceries. The RV park we had for the night was quaint, poised on the Sacramento River. The banks were flat and abundantly populated with river rock, and noisy seagulls. Maybe I would find some gold nuggets here?

It's a beautiful morning! Cool, but not cold. The gulls, ducks and geese we had for neighbors were relatively quiet this morning. Our adventure today was to hang out with Justin's grandpa in Redding. It's a charming enough community, and I recalled the stories his grandpa told of how often gold was found here in this area. I will tell you, we found gold alright, real gold, not fools gold, shiny and lustrous... floating in a bottle of Goldschlager liqueur.

Click on this photo to see all of the Yosemite area.

Click on this photo to see artsy fartsy pieces.