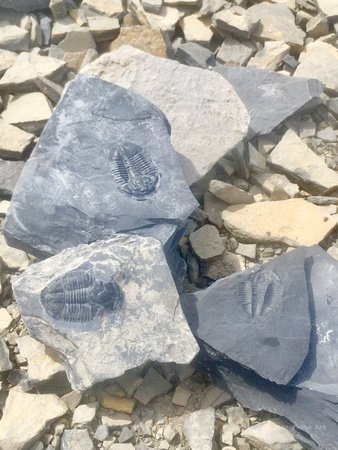 On the road again after a refreshing break. Today we head south to a site rich with fossil trilobites, a place I’ve had on my radar for a long time and can finally go see what its all about. What’s a trilobite you ask? Well, let me introduce you to the little “bugs”. They are an extinct marine critter, known to be the first invertebrate life on earth. They look slightly like a segmented beetle or maybe a crab. These prehistoric little things scuttled about the sandy bottoms of the seas that have long disappeared, encasing their hard outer shell in limestone shale. These particular ones can range in size from a pinhead up to two inches in length and are quite fragile upon excavation, some 500 million years after their demise.

The site was U-Dig Fossils, declaring themselves to be the best place in the world to find fossil trilobites. We stayed the night in Delta, about 30 miles from the fossil site, at Antelope RV Park. It was an ordinary RV park, but while walking Lil, I happened upon several nuggets of obsidian! These days, I spend most of my time with my head hanging down in search of unusual rocks or fossils. Obsidian is a naturally occurring volcanic “glass”, created when lava rich in silica cools too fast for crystals to form, and is shiny like broken glass so it’s very easy to spot.  After our walk, and after my pockets grew too heavy with rock, we returned to the RV and Justin and I took the scooter over the bridge to grab lunch at the Ashton Burger Barn. Upon returning to the RV, I made sure we had all our tools together for the quarry the next day; rock hammers, spades, buckets, gloves, and so on. I was quite excited!

Up and at it bright and early! It’s time for bug hunting! We pulled out and headed for the quarry. We turned onto a gravel road with a sign pointing us toward Death Canyon, which I was hoping we would avoid. It was 20 miles down this dirt road before we hit the fossil place. Nothing makes you feel more chubby than driving down a washboard gravel road and feeling everything on your body jiggle in rhythm. We finally arrived at the quarry and parked the RV. After a brief introduction to hunting, we gathered our tools and with Lil in tow, headed into the pits. It was a relatively small quarry, but the black splinters of shale were everywhere. We picked a spot and began hunting, eagerly splitting rock in search of the elusive trilobites. It’s quite a gratifying feeling when the hammer strikes the shale with a strong but hollow hit, fracturing open to reveal even the tiniest body. Lil quickly became bored being tied to my waist, so I built her a shade shelter from the rocks and perched her bed atop for the roof then laid my shirt inside for her to spread out on. She was quick to take advantage of the shade hut while Justin and I grew more burned in the afternoon sun; a 74 degrees at an elevation of nearly 7,000 feet was warm for all of us. After a few hours, some blood blisters, and aching arms from hammering, we were satisfied with our buckets of finds. We collected nearly 30 small specimens which were smaller than a nickel, around 8 large specimens an inch or two in length, and several in between. I was thrilled! We sorted and stowed them and went on our way, with visions of trilobites dancing in my head yet.

We decided to continue on out of town to see how far we’d get before stopping for the night. We made it an hour and our dust covered aching bodies wanted rest. We still needed to see what kind of adventure we could find for the next stop.

These are the only photos of our excursion this day. 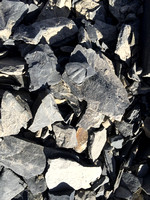 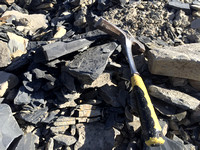 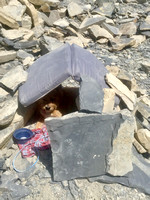 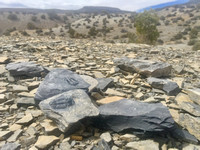 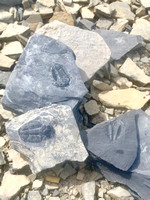