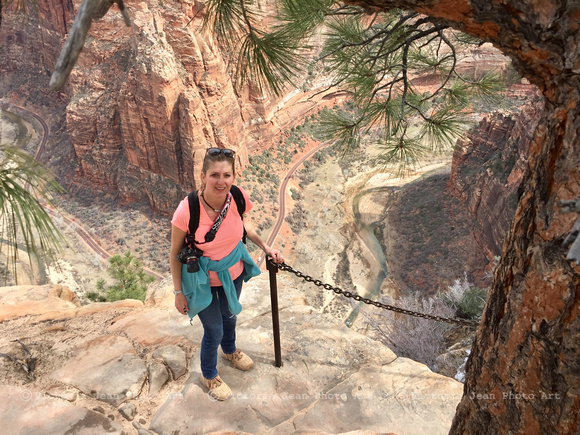 On our way to Utah today!  We had several stops on our agenda before spending a few days in Zion. First stop were The Toadstools. These are some pretty neat formations, looking just like you’d guess, a giant mushroom.  It was a short hike in, and it revealed to us an unusual surrounding that felt a little like walking on another planet. The limestone eroded away into interesting mounds and hills, future toadstools in the works. The toadstools that were present were few, but nonetheless impressive. Time had worn away so much limestone, leaving large rocks precariously perched atop their pinnacles as if giants gently placed them there. We had fun climbing around a while before heading back. Lil seemed to enjoy climbing the rocks as well, but was ever so cautious when crossing gaps in the rock; she gets braver every day.

Next stop along the way was Johnson Canyon Scenic Drive; a simple road along some noteworthy attractions. They are all on private property, so no hiking just yet. There was a list of things for us to watch for, making it feel a bit like a scavenger hunt. A few rock formations along the cliffs that resembled certain animals, and most interesting to me was the old set to the Gunsmoke series, or at least what remained of it.

Click on photo to see more of the scenic drive.

Back on the main road, the last sidetrack was Huntress Slot (aka Diana's Throne), a few mile hike down into another well known slot canyon with striking mountain views. We parked the RV along the dirt road and started in on foot, sinking and sliding in the sand. It was brushy enough with quite a few tall trees, and the trails were well worn by 4x4 vehicles sporting about in the past. Somewhere along the trails, we missed the path to an easy way down into the slots, so instead we opted to scurry down a steep and slippery track made by rugged riders. Our mountain goat of a dog did just fine, though we struggled a little. Once at the bottom, the sandy trail wound through impressive scenery, multi-colored mountains looming over us with occasional trees dotting along the ridges. I was taken by how tenacious some of these plants were; with everything fighting for resources, trees clinging to sides of mountains, cactus and grasses squeezing out from cracks. Farther along the sand changed color a tad from an light orange to more vibrant coral, the contrast was subtle but eye catching. I had a hard time keeping up with Justin and Lil due to my frequent photo stops. We got to the end and had to turn back, giving us another vantage point of the path we just took. Then, the dreaded climb back out, it kicked my ass but Lil bounded up with no problem, pulling Justin a little as she climbed. Back at the top, I was breathless, thankful the rest of the evening would be low key. We found an RV park to stay at not too far outside of Zion, so we tucked in and called it a night.

Up early, excited to start the day inside Zion National Park. We decided to drive the RV in and have a home base for the day. The one thing that made me slightly nervous was the tunnels. One is large enough for us, the other we were unsure of, so we paid the extra few dollars to have them close traffic going in one direction so we could drive down the middle. Now wait, don’t think we are unusual, this happens many times each day with the number of RVers that drive through. We eventually found a parking spot near the trailhead of the hikes we planned on for the day.

First hike planned was Angels Landing. This was the next thing I was apprehensive about. It is a few miles up some pretty steep switchbacks then a hazardous trek along the edge of the ridge, often described as a knife-edge 1400 feet in the air with sheer drop-offs and only chains to grip onto for dear life as you inch along the ridge. Some have fallen to their deaths on this particular hike, and I did not want to be the next name on that list. We got to the top just before the chains started. I gawked out over the thin ridge that laid before me, seeing only maybe a foot or two of walking space before the sides cut out drastically, then looking to either side of me and seeing the eensie weensie thread of a road and cars waaaay down at the bottom. OH HELL NO, nope, not doing that! I looked at Justin like he was crazy, because he was, and he convinced me I could make it. I was never so scared, and gripped on to that chain like a mad woman. The few spans where there was no chain, I felt like sprawling out onto my belly and inchworming myself along, but I couldn’t embarrass him that way. Instead, I shuffled along in squatty baby steps with my butt out and arms way out to balance. The sandstone was very slippery where it was covered in sand, which was EVERYWHERE.  A kid slipped in front of me and my heart leapt out of my chest as I squeezed my eyes closed and whimpered. But obviously, I made it to the peak and back. We even managed to sit at the top and eat a little (though I felt like vomiting), and snap some photos to prove we’d done it. I hadn’t taken many of the climb because I was way to stinkin scared. At any rate, I’d do it again, though next time I’d calm myself more so I could properly photograph it, because the view is stellar from way up there.

Angels Landing In The Distance

Click on photo to see the hike to Angels Landing and more of Zion.

Back at the bottom, we were beat. Not just from the hike, but from the fried nerves from braving it. I took Lil for a walk along a pet friendly trail so she could get her excitement in for the day, and lucky for her, there was a herd of deer on the trail. After fussing at them for a minute or two, we moved along. The river ran along the trail, and at the first access point, she bounded down to the water and waded around lapping it up. She managed to hit up every river access point along that trail, and was also pooped out when she got back to the RV. We drove the scenic drive farther into the park, and squeezed and inched by all the cars crowding the road near the trailheads along the way. We stopped at the gift shop and picked up some t-shirts to commemorate our accomplishment for the day, then drove back out. Lil had the best seat, atop my lap on a pillow with her ears flapping in the wind as she hung her head out to see the park pass by. We bailed on our last hike we had planned, we were all worn out and ready for rest.

After a well earned night of rest, we wanted to go back into the park but wanted to take the scooter this time. We decided to go later in the day so it would be a warmer ride. For the morning’s excursion, we went to Coral Pink Sand Dunes State Park. I was so impressed by the white dunes, I wanted to see more, and the color must be spectacular based on its name. We got out to the area, it was more wooded than I expected with ridges outlining it, but the dunes were still remarkable. Lil was so eager, she bounded through the cold sand the entire time we were out there. I wanted a better vantage point, so we decided to climb the biggest dune in front of us. It was deceivingly sizable, much taller than we expected, and the sand ran out from under each step we took, almost feeling like we were walking backwards at times. When we finally made it to the top, everybody collapsed to rest. The colors seemed to change between lovely facets of orange and coral as the sun faded in and out of the clouds. My favorite part were all the little tracks we could see from the dunes residents, most notably the tiny plump paw prints of the kangaroo mouse and scuttle tracks from the endangered tiger beetle. It was a great time, and a good way to burn off energy in the pup.

We took the RV back to our camp and let Lil rest while we bundled up in layers to scooter into the park. The ride was quite comfortable, and we were able to peel off all our layers and squeeze them into the scooter trunks to take on our next hike. It was an “easy” one up to the Emerald Pools. Most of it was paved and led to meek trickles for waterfalls and somewhat puddle sized pools.  We opted to continue up farther on the less improved path of rocks and sand. At that point, I was feeling the burn of all the hiking we’d been doing the past few days. The upper pool was a little more picturesque but sadly, not that emerald. The excursion left me with some good photos anyhow. By the time we got back to the RV, it was after 5:00 pm and we were bushed. A light dinner with some photo editing, and this day was done.

Click on photo to see all of the Zion photos including Emerald Pools.