The Colors of the Desert 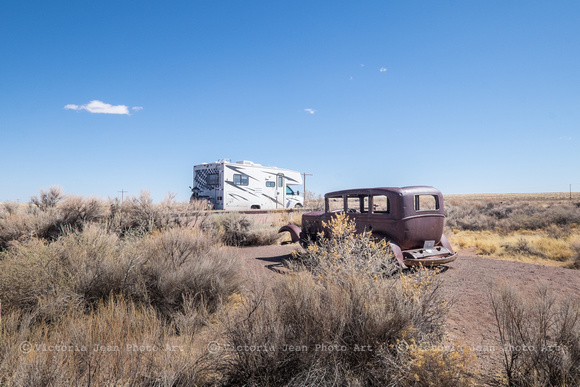 Our next stop was at Petrified Forest National Park. As you guessed, it has one of the largest deposits of petrified wood in the world, but wait, there’s more! The drive along its roads reveals the magical marvel of the Painted Desert, more ancient petroglyphs, ancestral Puebloan homes, fossil dinosaurs, a portion of the original Route 66 and so many vistas to pull aside and attempt to take it all in. Today was a lovely day for this stop too, nice blue skies with just a smattering of fluffy clouds, and a gentle breeze, well actually more like a fierce striking wind. It was so damn windy, I had trouble standing upright at times, and Justin mentioned a point where he felt the RV would actually flip on its side. Apart from that, it was an overwhelmingly fun day. I couldn’t believe the palate of colors mother nature conjured up in just one area, it was impressive. There were areas of “forest” we could walk to get a close-up view of the crystalline tree trunks strewn about. There was one particular area called the Rainbow Forest where the most abundant and colorful pieces could be found, with remnants splintered around in sparkly wood chips as if they crumbled off a dead tree just yesterday. Actually, this area used to look like the tropical jungles of Costa Rica today, back over 200 million years ago when trees were dense and dinosaurs called this place home. Well protected since becoming a National Park in 1906, there is so much to see, we made a day of it. After we all were winded out, exhausted and dried out from fighting the intense desert gales, we parked just outside the park at a souvenir shop where they welcome boondockers. It was time to relax, work through the zillion photos I took and get some grub in our bellies. Even Lil was worn out.

There are a ton of photos to click through here, trust me, it's worth it!!

It got cold last night! 17 degrees when we woke, and the water in the RV froze (not the first time that’s happened to us). I was very thankful we had the propane heater to keep us warm through the night. It didn’t take us long to get things together to meander on.

We were headed in the direction of the Meteor Crater in Arizona, so we thought, why not stop? The terrain was so flat and boring as we drove on, I thought I’d be able to spot this thing miles away, after all, it is over 4,000 feet across and 700 feet deep. But surprisingly, it wasn’t that easy to distinguish; what appeared to be foothills were actually the rim. When the meteor struck (estimated to be about 150 feet across, weighing several hundred thousand tons and hurtling into the crust at 26,000 miles per hour), it raised up and folded back the plains sending rock and debris the size of houses flying for miles. They found large fragments of it, and sell small fragments in their gift shop to suckers like me.  Some people were not impressed, calling it “just a hole in the ground”, but me, I geek out about this kind of stuff. It was damn cool to be teetering on the edge of this massive event that happened some 50,000 years ago, knowing that we are not all that strong and untouchable of a planet. It was a quick visit, and thankfully, active duty military get in free, or we may not have seen it at all. In the first photo, look for the people standing on an overlook to the lower right. That should give you an idea as to its size.

Crater View With People In Distance

On we drove, through mind-numbing sameness as Justin said. We were close to the Navajo Nation Reservation, and were seeing a lot of signs along the road beckoning us to come visit their shops. We fell for the one with a large photo of a mouthwatering Navajo taco, and swung in there for a nibble. It was a large complex in the town of Cameron, selling all sorts of Native American creations and trinkets. The restaurant was also oversized, able to handle the busloads of tourists that come through during busy season. We split the Navajo taco, good thing too because it was more food than we could eat. It was just as good as the photo made it look; frybread layered with cowboy beans, lettuce, tomatoes, salsa, and some spicy green chilies. I got some of the frybread to go to have it with syrup later (Dad called it “stretchers” when he made it as a treat for us). Imagine warm slightly doughy and chewy bread deep fried just enough to give it a faint crunch. I should have gotten a bag full.

Driving after eating was even more sedating, and I hoped we’d arrive at our destination soon because I was fighting off sleep. Eventually, the town of Page came into view. We found a good spot in an RV park and settled in. We’d be here a few days based on what the area has to offer. We rolled the scooter off the back and burned around town a bit. It was very chilly, but we didn’t have far to go. We had a beer and munchies at one stop, then went back to the RV to crank the heat while we laid out plans for the next few days.