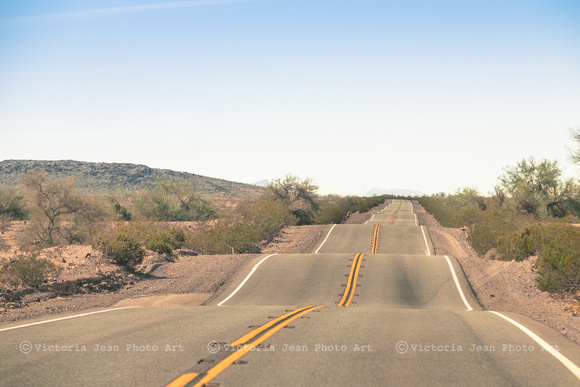 We started this morning with one last hike through Red Canyon before driving out of the area. Lil enjoyed it just as much today as the first day, climbing rock like a mountain goat.

Click on photo to see Day Two of Red Canyon.

On our way to the next stop somewhere between Bryce and Las Vegas, we cruised up into some beautiful wooded mountain tops covered in snow and adorned with stark white birch trees sprinkled among the tall pines, the Dixie National Forest. The elevation was so high, it made the drive down quite nerve racking for me; extreme grades with the RV chugging into the declining curves like an out of control locomotive. O-kay, maybe I exaggerate a bit, but that’s how it played out in my head. We went along some back roads, riding atop washboard gravel, and found the first possibility for camping. It required squeezing the RV through two very narrow and short tunnels under the highway. We stopped right before going through to mentally measure the fit, and to measure our courage, of which I had none. Justin decided to go for it and slowly but expertly maneuvered through both tunnels with no difficulty. However, once we got through and into the campground, we struck out on finding any open spaces, so back through the tiny tunnels we went. Our next possibility was within the red rocks of another beautiful park. We drove in, again on gravel roads and every spot we came upon was occupied. We decided to go as far as spot 8, and if that was full, we’d  turn back. The farther in we drove, the more narrow and sketchy the road became. At one point, it was only wide enough for a single car, and as I glanced out my window, all I could see was a sheer drop off into a ravine after the soft shoulder. I squeezed my eyes closed and leaned far to the center of the RV, as if any of that would help if we slid off. Once again, Justin got us through it just fine, and not one line worry on his brow, though I will say he was getting tired of my anxiety fits. I was quite relieved when we got back on blacktop. We headed into the small town to get some lunch and decide our next move since we’d struck out at both camps. After lunch, it was decided we go the whole way to Las Vegas and rest up there for a few days.

Click on photo to see more of the Dixie drive.

It was later in the day when we arrived in Vegas, but Justin found the perfect spot for us to get some R&R at. It was the Oasis RV Resort just a ways off the strip. An easy night with pizza delivered right to our RV, then tomorrow we’d investigate more.

What beautiful weather!! Sunny, 70’s, and breezy. We walked Lil out to the dog park for some morning exercise then let her relax the rest of the day in an air conditioned RV. She seemed ready for a long nap after all the hiking.

We spent part of the morning at the pool in the RV resort. This place was pretty posh. Mostly filled with snowbirds staying for the winter, and they had all the amenities they could want here. For us just driving through, we appreciated those extra perks! After the pool, we had lunch at the RV with Lil, took another stroll to the dog park, then tucked her back in while we caught an Uber to the strip. Down on the strip, we strolled and drank while taking in the sights. We saw a fella dressed as Elvis come zipping by in his scooter. Ha, how awesome is that? I raised my hand to give him a high-five as he zipped by, and his only response was “Where’s your money? Where’s your camera?” and kept on rolling. Anything for a buck I guess, this is Vegas after all. Justin and I had a chuckle over it though. We deliberated catching a show, but opted to treat ourselves to what Google had told me was the best buffet in Vegas, The Buffet at the Wynn. I was more impressed by their décor at first; huge fresh floral arrangements of whimsical colors and other varied vibrant ornaments embellishing the fresh green vines growing throughout the lobby. What a gas! Even the buffet area was vivacious and stylin’. But the food, ohhhh maaan. They even had the crab legs already split so all we had to do was spoon it out and gobble it up! I gorged myself and felt like I was going to split open after eating so much. That brought an early end to our excursion, we both were too stuffed to do anything else. 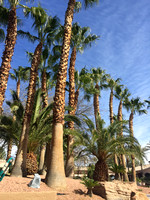 I didn't bring my real camera into the city, so all you'll get for Vegas pictures are these few.

We departed Vegas, satisfied we had seen all we wanted to. Our next stop was close enough, Bullhead City just outside of Laughlin, Arizona. There were a few things nearby we wanted to check out before leaving the area, and the RV spot Justin found at another snowbird village was free for a few nights. It sat high atop a hill with a perfect view overlooking Laughlin and the Colorado River, probably the best RV park around with this view.

Before settling in for the night, we parked over in Laughlin and took Lil on the riverwalk stroll, letting her play along the banks of the river. When we finished, we drove over into Bullhead City, just across the river from Laughlin, and had lunch at the Black Bear Diner; a very busy place with good ole café food. I ordered a taco salad thinking it would be a light lunch, and they brought out a salad the size of a watermelon! How the hell am I going to eat all that!? Who am I kidding, I tore into it and managed to make most of it disappear. We settled in at camp for the night and would check out Laughlin more tomorrow.

Click on the cactus to see a little bit of the Bullhead City area.

Still having great weather, even had to turn on the air conditioner last night, I sure am happy to be out of the freezing weather. Today’s outing was to Oatman where wild burros (mules) roamed the streets, eating from your hand. We kept Lil in the RV because the burros are known to try to kill dogs, thinking they are coyotes. The town itself was very small, and still mostly kept in an old western theme with wood plank sidewalks. The burros originally came from back in the 1800's when this town was a mining community. The burros would carry ore and tools back and forth in the mines. After the mines were shut down, the burros were released to make it on their own and the town mostly died. Today, the burros are abundant and have made friends with most of the townfolk, often being shooing off the wooden walkways. For the most part, they are welcomed, and a few even have names and will do tricks. Tourists arrive by bus and car and drive among them, slowly weaving past them in the roadway. We had a few cubes of feed we were treating them to. At one point, the burros were quick to remind us they are still wild animals and don’t give a shit if you’re in their path when they break out in a tussle or mini-stampede. A handful of them got feisty, kicking up their heels in a cloud of dust and chasing each other in an unruly fashion, barely skimming by myself and a few other tourists. That was enough to keep me away from the groups of burros, and spent a few more minutes photographing some of the younger ones, then we decided we saw enough and hit the road back to Laughlin.

Click on the photo to see our Oatman visit.

We played with Lil a while back on the riverwalk and eventually made it back to camp where we parked the RV and broke away on the scooter to check out the “nightlife” in Laughlin. We ate some appetizers at a few places while catching some beers. Most of the casinos were packed, and like Vegas, each had a stale smoky atmosphere. Laughlin is much friendlier and a slower pace than Vegas, our favorite spot was a cow-themed tiny casino on a second floor above a tiny convenience shop. Once again, after filling our bellies, we called it an early night.

Happy St. Patricks Day! This morning, we went to check out a trail called Grapevine Canyon with Lil. It required traversing some steep granite-type rock which held a small spring, trickling through the middle. At the beginning of the hike were some 1,000 year old Native American petroglyphs. Interesting enough, though much looked as if modern imitation petroglyphs were carved over them.

PetroglyphsWhile it almost looks like chalk on the rock, it is really images carved deeply through the "desert varnish" that builds up on the stone over many years.

Click on the Petroglyphs to see our Grapevine hike.

We left the Laughlin area and headed straight for Westminster, California to Justin’s childhood house where we would be able to relax for a few days with his Mom and little doggie, Martini. Maybe even catch up on maintenance on the RV. I hadn't been to Southern California since our wedding on Dana Point in, oh when was that again... 2012? I had forgotten how beautiful it was. The hills were rolling green with dense cities settled in the valleys. I had also forgotten how tough the traffic was, and I was certainly thankful I wasn't driving. We could immediately tell when we crossed into California, the price of gas increased drastically! We were happy and relieved to finally arrive at the house where Mom Buckman had already started corned beef and cabbage for dinner. What a great night!

Click on the photo to see a few along the way to California.

With great food and company, there may not be much for blog posting over these few days, but I'll be back at it when we start touring again.