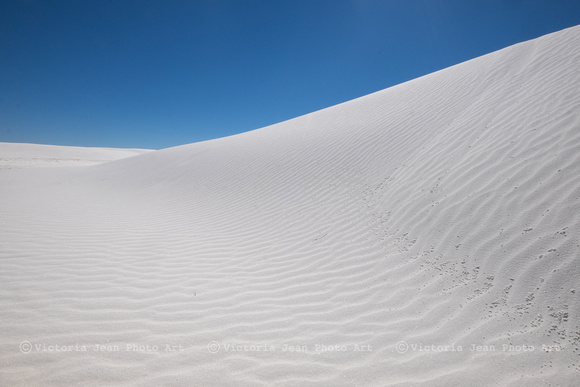 After leaving Guadalupe, we went into Carlsbad. We were curious if the Carlsbad Caverns were going to be worth the stop so we briefly checked out the attraction’s visitor center and decided it was a definite! Lunch at a Mexican restaurant just outside the park, and we were done with our excursions for the day. I really wanted to upload some of the photos I took over the last few stops, so Justin was sweet enough to let me have a wifi stop in town while he and Lil went off to run errands (gas, groceries). Needless to say, I had so many photos, I ran out of time and wasn’t able to get them all up. We weren’t in any kind of rush, so he let me sit at Starbucks for a few hours while my laptop churned away. Our camp for the night was simply a patch of BLM (Bureau of Land Management) acreage outside of town, boondocking. When I noticed light starting to fade, I abandoned my wifi task so we could go find our BLM spot. We got there just as the sun was setting.

It was indeed a patch, of dusty gravel in the middle of a scrubby cattle field, polka-dotted with dehydrated cowpies here and there. It was very peaceful really, especially with the lovely sunset. We were the only ones there, and nothing for miles; the desert hills in one direction and a few lights from the town far off in the other direction. Reviews told us this was a good spot to let your dog run, and so… she did. At first it was cute; she would grab up a cowpie like a frisbie and run in circles like a nut. Then she caught wind of something that gave her the speed of Flash Gordon. She tore off into the desert brush as the last bit of sun slipped away. I ran after her as long as I could, but for every foot I gained, she gained ten. I’ve never seen that chubby dog run so damn fast, and within a minute she was out of my view. Yup, you can guess, I lost my shit. Thank goodness for Justin (my rock) or I most certainly would have had a meltdown. Here we are, literally in the middle of the desert, dangerous spiders and snakes all around, and my baby girl is lost, likely thirsting do death, and every terrible scenario possible is flashing through my mind. We walked for almost a half hour, back and forth on a dirt road in the darkness calling for her. I had just given up, hoarse from yelling and running. (Cue dramatic music) I dropped to my knees like a blubbering fool with my tears staining my dusty face. (Now cue angels singing.) Just then I heard a faint crunch of gravel in the dark in front of me. I raised the beam of my flashlight up and saw the glorious goofy face of my tired but still very excited mutt. I hooked on to her harness so fast, then rolled her up for some hugs. Man, were we lucky. I was ready to put down roots in this forsaken place until she came back to me. Learned my lesson too, never ever again will this spaz be off leash until she is trained on recall.

We got back to the RV and checked her over for any injuries, properly hydrated everyone, I took a long shower, then all exhausted parties collapsed for a restless night of slumber.

Click on the photo to see more of our Carlsbad experience.

Restless night of slumber I was saying… Wind was gusty and kept knocking around a loose cap outside on the RV, keeping us awake. Of course, I brought Lil up to cuddle with too, still stupidly grateful she came back to us.

I made some bad french toast for breakfast, then we drove up to the Caverns. It was very windy and still chilly up in the elevation, somewhere near 4400 feet. Lil stayed behind in the RV while we walked the caverns. We took an elevator 750 feet down to the “Big Room”, an immense 8.2 acre area adorned with colossal features like “The Bottomless Pit”, “Giant Dome”, “Rock of Ages” and so on. Let me tell you, when I previously exclaimed how wonderful the Cathedral Caverns were in Alabama, I was woefully unprepared for the marvel of Carlsbad Caverns. If you ever find yourself in this area, you really need to make the time to visit the caverns, it will blow your mind. After taking it all in, we headed back to the RV.

With no real destination in mind, we started driving, aimlessly headed northwest. We wound up at a small RV park in the town of Mayhill, a tiny town up in the foothills of the Sacramento Mountains with one store and one restaurant. I was stunned to see snow flurries in the air. The spot was cute enough, a crystal clear brook babbling just outside, and flocks of farm geese grazing by driving Lil crazy. We even were visited by more deer and turkey. I'm keeping this dog under lock and key with so many tempting things to chase. We don’t need any more drama. We did walk up to the tiny town with her where the shop owner invited us all in to stroll around, telling us how much he likes dogs. It was cold enough, we hunkered down for the night to enjoy a relaxing evening for a change. Hot tea, soup and salad.

The night was cold, but we stayed warm enough with the propane heater going. We woke to find a thin delicate layer of snow that quickly melted away with the rising sun. We were too cold to enjoy it further here, onward we go.

Click on the photo to see more from Mayhill area.

We curled up and down through the twists and turns through the Sacramento Mountains, it was beautiful and quite a change from the desert we'd been seeing. Soon, the mountains broke to reveal a vast white area in the valley below too far off in the distance to make out what it was, but I knew, and we made our way down to those white sands, White Sands National Monument to be exact. It was just a stop off on our way to Albuquerque, but I was jazzed about seeing and walking on the tall white sand dunes. They are so large, they can be seen from outer space. It sits around 4200 feet above sea level, covers approximately 275 square miles. It's unique because it's sands are composed of gypsum and reflect the heat from the sun (typical sand dunes are crystal and absorb heat). If you want all the nerdy details, look them up at the Wiki site. We spent a fleeting half hour there, though after seeing them in person, I could have spent several days photographing them. It is really quite surreal, to be able to walk and sled along them anywhere you want, even camp if you get the permit. This is a place I'm coming back to!

Click on the photo to see more of White Sands.

After that brief stop, we were hungry, and we saw a sign for Del Taco along the way. Let me just say, I haven't eaten there since moving away from the Pacific Northwest, and had been googling close locations as we drove west. If you've ever had their chicken soft taco, you'll know why I'm nuts about it. We filled our bellies fast, it tasted so good, then drove on.

Along the road, I kept seeing signs for Valley of Fires camping. How inviting, I thought. Then I understood why it was called that. In a small area, there was a massive lava flow field, huge knots of folded oozing lava from a nearby volcano many years past. It spans nearly 20 miles and is quite the sight to behold, a break in the daunting monotone desert and a lovely contrast to the white sands we previously played in. Of course, we stopped long enough to get Lil's picture atop one of the frozen flows.

Click on the photo to see more of Valley of Fires.