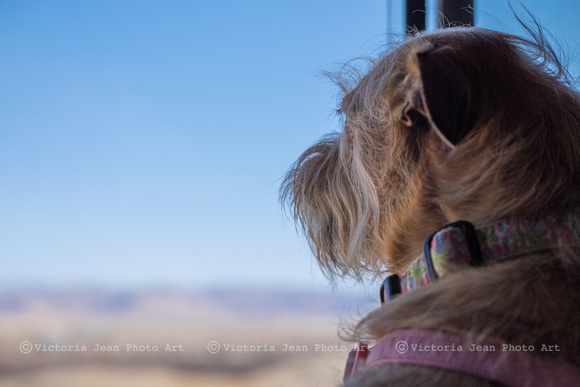 Today is Justin's official retirement day, retiring after 20 years in the US Navy. Congratulations babe, you've earned this time off!

We left Utah today heading into Colorado. We decided to give Mesa Verde National Park a try even though portions were still closed from the winter. The landscape through Utah remained unbeatable with the constant rising ridges falling into spanning valleys. We stopped briefly at a few viewpoints along the way, just long enough for me to gawk in awe at the view and try to capture it in camera. It is still astounding to me, how diverse and incredibly beautiful this land is; the different layers of rock, blending together in kaleidoscopic patterns with shapes and holes whittled by time. We drove through Moab, hoping to stop for lunch but it was teeming with tourists, way to busy for our taste. I swear there were more 4x4 dune buggies than there were people though, apparently this place is known for its desert 4x4 recreation. We caught a glimpse of some arches off the road, but didn’t brave the masses to get a closer look. Farther away from that bustle was something that caught our eye, the Hole In The Rock. We thought, sure, they’ve got to have food there, right? That too turned out to be a tourist trap, with a meager grocery store as its only source for food. It is apparently a 5,000 square foot “house” build into the mountain and can be toured for a small price- which we opted out of. I'm sure it would have been a really neat thing to see, but we were on a somewhat strict timeline. Instead, we scrounged together a lunch in the RV and went on our way.

Click to see photos of the trip from Utah to Colorado.

Our stop for the night was at BLM land in Cortez, Colorado, just beyond the Mesa Verde park. Before pulling in, we let Lil run for a while at the dog park in town. It was a fantastic park for her; very large, lots of brush to “hunt” in. She played for a while, then we left to go claim our spot at the BLM land. It was the first spot we found upon driving in. The area had around 12 spots along a rugged dirt road far off the main highway. It was all surrounded by trees and brush, so every spot felt very secluded. We walked all the way back in to see what the remaining spaces looked like, some were only suitable for tents while others could manage an RV. There were some pretty deep ruts in the road, and I was glad we didn’t decide to drive back in farther. By the end of the night, I believe every spot had been filled. We were treated to a gorgeous sunset as well, with the colors seeming to drench everything around us until it slowly faded away.

Our BLM sunset in Cortez, Colorado.

We left the BLM spot this morning and drove into Mesa Verde park, stopping at the visitor center to get a better idea as to what we would be able to see today. We had only 3-4 hours to burn here before we needed to get back on the road. Mesa Verde’s attraction are the multitude of cliff dwellings carved and built within and around the the cliffs and ridges of the area. The earliest known structure is dated somewhere near 640 AD and they continued building and rebuilding for several hundred years. Our tour was mostly a driving tour, stopping along the way to peer over the ledges to see ancient sites. It was astounding to imagine what it took to build these, then to come and go on a daily basis with having to climb the cliffs by way of foot and hand holes carved out of the stone. Some seemed as elaborate as small neighborhoods, containing up to 150 individual rooms and many other chambers for worship and gathering. We were unable to take any tours of the sites this day, but perhaps sometime in the future. As we drove back out, I couldn’t help but snapping a pic or two of the skeleton trees left behind from wildfires decades earlier.

We drove on to Albuquerque, a stop of necessity more than anything else. We had to stop at the military base there to get new identification cards since Justin’s official retirement was April 1. We arrived at the base late in the afternoon and simply made dinner then hit the sack.

After a surprisingly quick visit to the ID center on base, we were back on the road. Our trip back is going to be much faster than the trip out to the West coast. We’re trying to make good time, with hopes to get to Florida in 10 days or so. Our goal today, we picked Amarillo. The only reason was because it’s within our range of 300 miles, and the Cadillac Ranch popped up on Google Maps while I was looking. For some corny reason, I wanted to see that. We drove on through New Mexico, through the wind and pollution induced haze. Eventually, the horizon flattened out leading me to believe we finally crossed into Texas. It was still very windy when we arrived in Amarillo. We saw the Cadillac Ranch from the road and pulled over in the parking area to see what the draw was. I expected it to be more elaborate, but I’m guessing everyone that doesn’t research it said the same thing. It’s simply an art piece of a sequence of Cadillac cars erected in a cow pasture that people come to visit and paint sentiments over on a regular basis, reminding me of the Folly Boat. I took Lil and walked out into the field for a viewing, and was so cold from the wind, I didn’t take the time to photograph it like I wanted. Besides, there were so many people coming and going, many spray painting their own expressions upon the car bodies. Even on a windy day in a wide open Texas field, the smell of spray paint was heavy in the air, making me wonder if these things ever had a chance to dry before the next fella came along with a new coat of paint. Walking back out, I noticed hundreds of spray paint cans strewn about in the pasture.

We arrived on the outskirts of town a few minutes later and checked into a nice RV park, where I could catch up on a few chores before we scooted into town to have Texas steaks at Hoffbrau Steak House. It was a ff-ff-ff-ffreezing ride on the scooter, but the delicious coffee rubbed steak was totally worth it!