We arrived in the tiny town of Wilmer where we camped at a private RV park along a river. It was empty, but quite nice. Yet again, no excursions, a simple walk around the grounds with Lil ending with rain showers singing us to sleep later.

After leaving the Monroe area, we arrived in the Tallahassee late in the afternoon and found an RV park with laundry and wifi so I could catch up on some chores. We grilled surf and turf for dinner and enjoyed an evening of warmer temps.

We started off for the Suwannee or Withlacoochee River area near Live Oak. Our goal today was to look at several properties along the rivers in the area, hoping to find a nice little piece we could buy for recreation use. Along the way was Vortex Springs, a place Justin wanted to SCUBA dive, so we swung through and dove  for a short while. It really was a short dive, lasting only around 20-something minutes with our mini SCUBA sets. The water was a cool 65 degrees and crystal clear, teeming with panfish. The limestone and ancient coral formations below the waterline were stunning. There was a cave system farther down, but we just swam around the outer edge of it enjoying the character with the black hole beckoning us to enter the caves. I'd love to come back when its warmer outside and we have more time, and when my gopro is charged; unfortunately no photos were captured due to a dead battery. After drying off, we got back on our route to the Suwannee River to check out land.

We stopped at several properties, poking around through the overgrowth, gauging how suitable each was. Lunch was at one of the only restaurants around, just outside of the dying town of Lee. After lunch, we tried our luck at finding a camping spot at our favorite park in the area, Suwannee River State Park. We've been there before and knew we could only book online, which told us all sites were taken, but often times, people no-show. We pulled in and asked at the gate and sure enough, a spot was available. Before setting up, we drove back out with our reservation in hand and went on to explore a favorite spot of mine nearby where I’ve been able to find fossil sea urchins (echinoids) in the past. While I didn’t collect as many as before, I was happy with the specimens we were able to leave with. I actually got very warm while hunting, it was 87 degrees and 70% humidity, no wonder! Time to go back to the state park, plug in and turn on the AC!

The fossils of the Suwannee River! 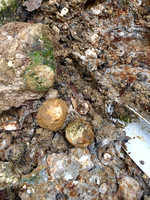 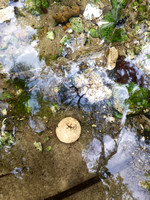 Once we settled in, I took Lil for a walk down to the river and let her swim a while. She loves going just deep enough to be able to float and paddle around. While we were walking the shores, I found outcrops of fossil coral and beds of hundreds of tiny seashell fossils, no wonder I love this place!

We eventually made a small dinner and watched a movie. As night crept in, I took Lil out for one last walk with Justin. We wandered in the dusk to a part of the park we’ve not investigated before and found a large rock perched over the river where we could crawl out and sit, just soaking in the warm night breeze and fresh air. With light sprinkles coming in, we decided to head back to the RV. It was dark enough to notice the special spectacle of the plentiful fireflies twinkling among the woods. It felt so magical, we just had to pause and enjoy the show for a while. What a wonderfully enchanting night on the river! I was grinning from ear to ear with how lifted this place makes me feel.

Justin convinced me to rise before the sun this morning, I mentioned the night before how beautiful a sunrise would look on the river. I begrudgingly rolled myself out, gathered up my equipment and walked down to the river with Justin and Lil. They stayed a little while, but left me there to play with catching some images. It was very overcast, so I knew I wouldn’t see any colors of the sunrise, but the mist and lush green around the river was too beautiful not to shoot. It was a refreshing morning with the smell of rain in the air. I could hear low rumbles of thunder off in the distance and it made me smile. It wasn’t long before I started to see flashes of lightening around me, then the rain started. I wanted so badly to stay out in the showers, taking long exposures of the drops hitting the water, but I soon became drenched and couldn’t protect my camera enough to merit staying out. When I got back to the RV, I literally had to wring out my coat. We waited for a lull in the rain, then packed up and pulled out to continue our search for properties.

We toughed out the intermittent showers, squishing our way through soggy woods, braving saturated and sticky dirt roads with a few we wouldn’t attempt driving farther on for fear of getting sucked into the mud. It stayed warm enough, but we were soggy most of the morning.  Along the way, there were some picturesque areas, I don't think anything around here would be necessarily a bad find. Alas, the search was over as the weather made it difficult to get into some of the areas. We found rest just outside of Ocala in Silver Springs, still soggy and raining.

Click on any photo below to see the Suwannee River area. 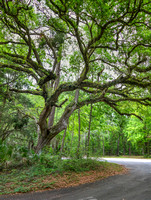